7th Pay Commission News: Delhi Transport Corporation (DTC) has announced vacancies for filling up various post in the state transport corporation. The above posts are Group A posts according to an advertisement published in the Employment News.

“DTC invites applications for filling up following Group A posts on deputation basis. Maximum age limit for the post is not exceeding 56 years on the closing date of receipt of applications, the deputation period initially for a period of 3 years and further extendable as per DoPT guidelines,” the advertisement said. 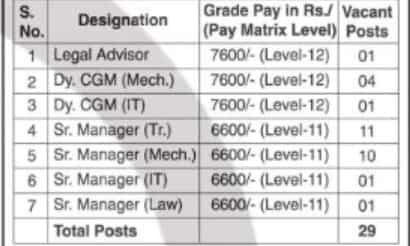 The application along with photocopies of supporting documents to be sent to the Manager (Personnel-I), Delhi Transport Corporation (DTC) Headquarter, IP Estate, New Delhi 110002.

The application format, criteria, terms and conditions of appointment and other details are available on DTC Website www.dtc.nic.in