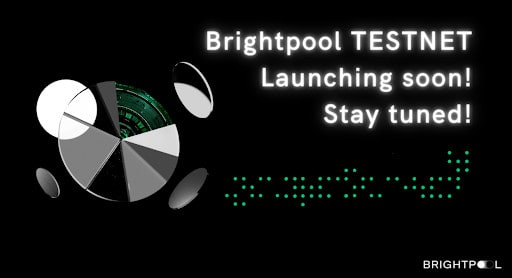 Brightpool came up with a cutting-edge type of trading based on a new Bid-To-Earn model.
It is the first DeFi platform that pays traders rewards for placing orders instead of charging commissions, and it is launching their public testnet this fall.

The platform will be tested in 2 phases. First, selected Brightpool users will be able to create a test wallet on Polygon’s Mumbai network to try out the basic functionality of the exchange. This phase will be accompanied by a bug bounty program. In the second phase – after completing the audit – we will deploy the Testnet on Polygon mainnet. During this phase we will launch the most professional airdrop in the space, rewarding the best traders with prizes worth thousands of USD.

The purpose of the Testnet is to showcase the exchange’s advanced price engine algorithm (based on the BSM model) as well as give early adopters a chance to familiarize themselves with a new way of trading which issues instant rewards to traders (emitted in the native BRI token) every time an order is placed (#bid2earn), whether or not the order is executed.

Order types on Brightpool are future orders with maturity periods of 1, 3, 5, 7, 14, and 28 days. The reward incentives are calculated by the price engine per instance. The sale of 1 BTC on the platform would generate a reward approximately equivalent to 1000 USD, depending on several factors. The order pricing algorithm is based on the crypto-adjusted version of the Black-Scholes-Merton model, which won the Nobel Prize in 1997 for its advances in derivatives valuation. The Brightpool Finance native token, BRI, is implemented using the LayerZero protocol, giving it a greater cross-chain capability.

Lucas Kobus, Brightpool’s Pool Master, said of the platform that it will “be an absolute game changer for the DeFi ecosystem” and “will inspire new types of projects with an innovative way of releasing tokens into the market. Our native token, BRI, will have strong fundamental value unlike the majority of projects in DeFi” Kobus stated. “I believe Brightpool will start a true DeFi 2.0 trend of platforms with their own liquidity and fundamentally strong staking with rewards in stablecoins and ETH for staking native tokens.”

A comprehensive formal verification audit of the platform is being conducted by CertiK. Brightpool has yet to release a formal date for its launchpad. Interested traders can follow Brightpool’s Twitter, Telegram, and Discord accounts to stay updated with upcoming news.

Brightpool Finance is the world’s first DeFi protocol which pays users for placing orders. Brightpool is built on Polygon’s PoS chain for increased speed and scalability and its token is deployed on LayerZero protocol, giving it increased interoperability between chains. Its BRI token is the first to utilize the new release mechanism dubbed ‘Proof Of Bid’ (POB), which adds a strong, fundamental value for BRI, and its pricing algorithm is based on the crypto-adjusted Nobel-prize winning Black-Scholes-Merton model (BSM). Brightpool is able to offer multiple ROI to traders due to its pool structure, revenue share, advanced price engine technology, and the volatility hedging aspect of its token.