The schedule for Day 4 of the Commonwealth Games 2022 is out.  India’s Commonwealth Games 2022 Day 4 campaign in weightlifting with Ajay Singh’s men’s 81kg FINAL event scheduled for 2:15 PM. It will be followed by the Indian men’s hockey team’s match against England, set for 8:30 PM and then table tennis team will take on Nigeria for their semi-final clash at 9:00 PM IST. Also, Harjinder Kaur will have her women’s 71kg category at 11:15 PM. 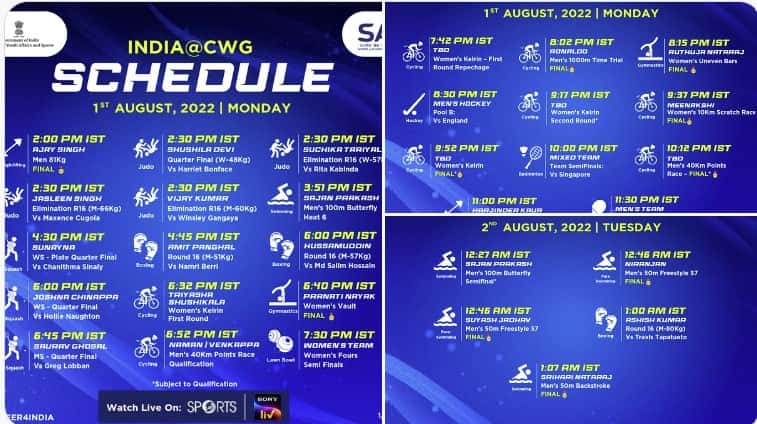 Meanwhile, India’s 20-year-old weightlifter Achinta Sheuli won gold in the men’s 73kg division at the Commonwealth Games 2022, lifting a new games record total of 313kg at the NEC Hall number 1 in Birmingham. He lifted 143kg in snatch and 170kg in clean and jerk to top the field ahead of Malaysia’s Erry Hidayat Muhammad, who took silver with a total of 303kg, while Canada’s S. Darsigny claimed bronze with a total of 298kg.

Congratulating Sheuli, President Droupadi Murmu tweeted, “Achinta Sheuli has made India proud by winning gold and making the tricolor fly high at the Commonwealth Games. You immediately overcame the failure in one attempt and topped the lineup. You are the champion who has created a history. Heartiest congratulations.”

In a series of tweets, Prime Minister Narendra Modi said, “Delighted that the talented Achinta Sheuli has won a Gold Medal at the Commonwealth Games. He is known for his calm nature and tenacity. He has worked very hard for this special achievement. My best wishes to him for his future endeavours.”

Why did govt quietly ban VLC media player in India?