BMW Group in India in an official statement said that it has no plans for setting up additional manufacturing operations in Punjab.

“BMW Group is firmly committed to its Indian operations with its manufacturing plant in Chennai, a parts warehouse in Pune, a training centre in Gurgaon NCR and a well-developed dealer network across major metropolitans of the country,” BMW Group in India added. 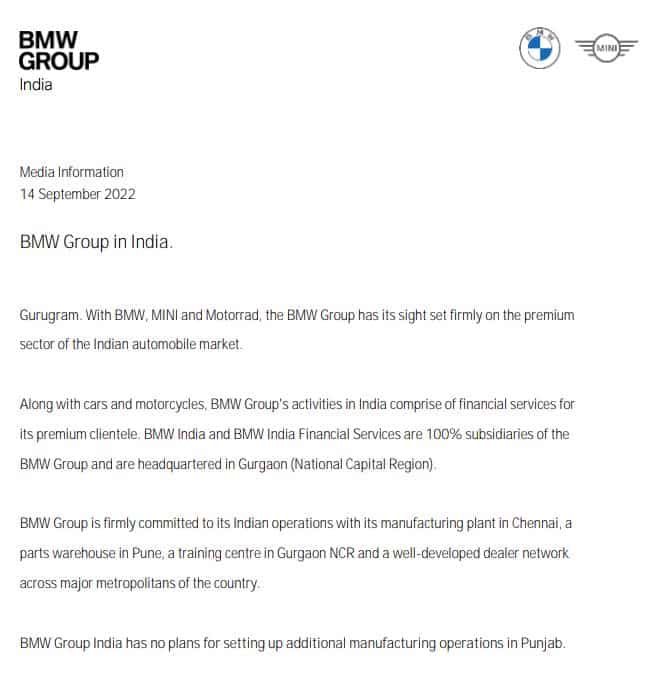 The statement by BMW Group in India came after Punjab government release said that Germany’s luxury carmaker BMW has agreed to set up its auto part manufacturing unit in Punjab.

“A decision to this effect was taken during the visit of Punjab Chief Minister Bhagwant Mann at BMW headquarters in Germany on Tuesday,” it said. Mann is currently on a visit to Germany to woo investors as his government promotes Punjab as the most preferred destination for doing business, PTI reported. 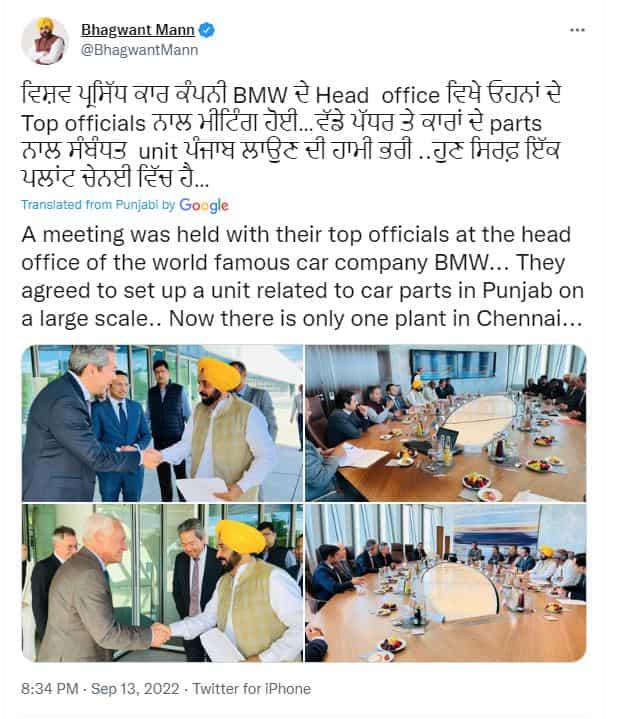 During the visit, the CM showcased the state government’s exemplary work to promote industry in the state after which BMW agreed to set up its auto component unit in the state, it said. An official release quoting Mann said this will be the second unit of the company in India as one such unit was already operational in Chennai. He said this will give a major boost to industrial growth of the state and open new employment avenues for the youth.

The PTI report said that the CM also invited BMW to collaborate with the state in the e-mobility sector. He was apprised that e-mobility is a major sector of focus for the auto giant, which targets 50 per cent of its global sales to consist of fully electric vehicles by 2030. The chief minister said Punjab’s EV Policy is expected to usher in a new era for the e-mobility sector in the state.

“With BMW, MINI and Motorrad, the BMW Group has its sight set firmly on the premium sector of the Indian automobile market,” an official press statement said.

“Along with cars and motorcycles, BMW Group’s activities in India comprise of financial services for its premium clientele. BMW India and BMW India Financial Services are 100% subsidiaries of the BMW Group and are headquartered in Gurgaon (National Capital Region),” it added.